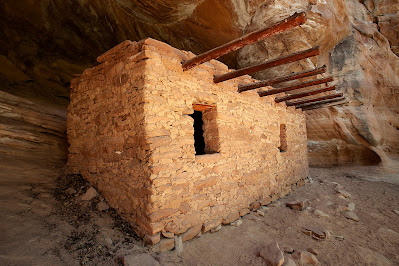 The Dollhouse Ruin in the Bear's Ears region.
(Click on images to view larger)

The U.S. desert southwest is remarkable in its concentration of archaeological sites, relics of the Ancestral Puebloans who occupied the Four Corners region until about 1300 AD when, somewhat mysteriously, they left. Anthropologists have pondered the abandonment of places like Cedar Mesa, Chaco Canyon, and Mesa Verde for over a century, and many theories have emerged to explain why these people abandoned elaborate structures and a well-developed civilization. The simplest explanation is that a “megadrought” in the late 1200s drove them out, but hypotheses are more nuanced, invoking resource depletion, violence from both within and outside, the breakdown of complex religious hierarchies, and increased vulnerability to environmental change caused by reliance on agriculture, to name a few. 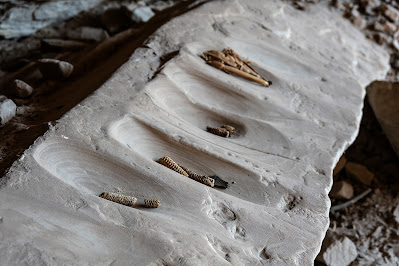 Reliance on corn may have been a mixed blessing for Ancestral Puebloans because of increased vulnerability to changes in climate. (Comb Ridge, October 2021). 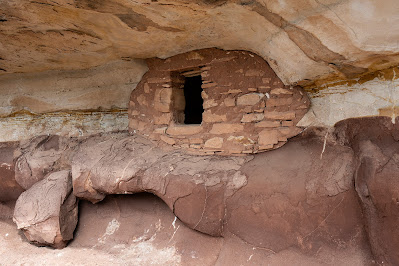 A granary on Cedar Mesa used for storing corn. (October 2021)

There is general agreement that by 1300, most of the sites across the Four Corners were abandoned. Evidence suggests that the Ancestral Puebloans migrated south and integrated with Hopi and Zuni peoples and other groups in the Rio Grande drainages, though it is still unclear why they moved from one dry place to another. What is clear is that environmental pressure led to a breakdown in society that culminated in abandonment and migration. 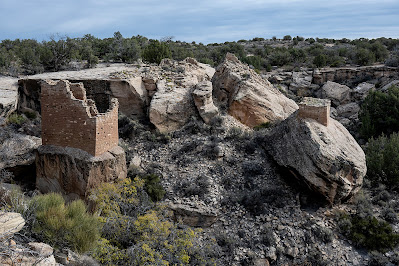 Masterfully constructed structures at Hovenweep National Monument, Utah. Why were these built on boulders? (October 2021) 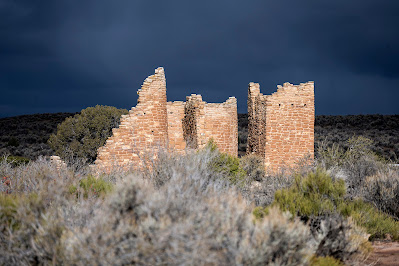 A ruin at Hovenweep as a storm builds in the distance. (October 2021)

While I was in the Southwest this fall, I read Douglas Preston’s book, Talking to the Ground, about a 400-mile horseback trip he and his family took in 1992 across the Navajo Reservation, tracing creation stories and talking with Navajo people along the way. In his 2019 epilogue, Preston espouses the idea that Chacoan power hierarchy depended on the belief that religious leaders controlled the rain, a strategy that worked well for them in wet years but not so well when multi-year drought inevitably arrived. This led to violence and the breaking of bonds holding geographically disparate groups together. Though theories continue to evolve, the gist remains the same—drought-caused stress catalyzed changes leading to abandonment of vast areas and dissolution of a well-developed civilization. Preston writes:

“What we know is this: one thousand years ago, the Anasazi embarked on a great religious experiment at Chaco Canyon, an experiment based on the (illusory) control of nature. It was an experiment whose ultimate consequences the Anasazi did not foresee. And it failed.” (Preston pg. 261) 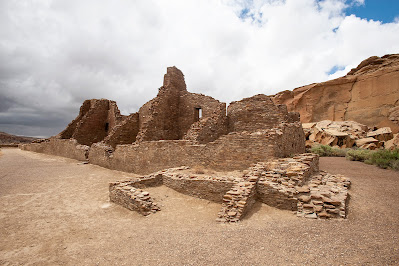 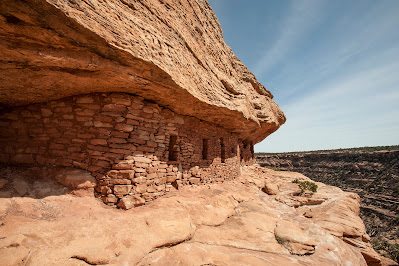 A 2008 New York Times article by George Johnson acknowledges this idea but suggests that abandonment may have been less sudden, though still ultimately driven by changing environmental conditions. The article concludes:

“Amid the swirl of competing explanations, one thing is clear: The pueblo people didn’t just dry up and blow away like so much parched corn. They restructured their societies, tried to adapt and when all else failed they moved on.” 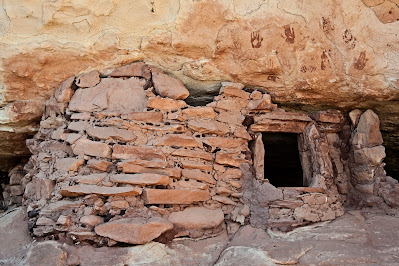 We still have marks on door trim in our house showing our daughter's height as she grew up. Maybe the handprints above this dwelling were the same. We think of ancient migrations in the abstract, but these were people like us whose lives were uprooted. (Cedar Mesa, March 2017)

Migrations in response to changing climate were not new, even in 1300. The populating of the Americas was mediated by the last ice age as people crossed the land bridge from Asia and walked southward. Further back, there is evidence that waves of migration of Homo sapiens from Africa into southern Europe beginning almost 100,000 years ago may have been driven by periodic climate changes that opened green corridors between Africa and the Arabian Peninsula.

Humans have always moved to more favorable environments when they could.

In September (2021) on our way to SE Utah to camp, hike, and visit ruins, we drove along I-70 in Colorado through the heavy smoke of the 2021 fire season, entering Glenwood Canyon where an extensive wildfire the previous year had denuded the canyon walls of vegetation. Earlier in the summer, unusually heavy monsoon rains generated enormous landslides, trapping people in their cars, briefly damming the Colorado River, and decimating parts of the highway, which was still being repaired months later. We arrived in Utah during an unseasonable heat wave and sweltered for several weeks before it finally cooled down. These extremes—wildfires, torrential rain, landslides, heat—are signs of a changing climate, but unlike the changes in the 1200s, modern climate change is global, not regional.

Even in 1995, Douglas Preston and the Navajo people he visited were aware of modern parallels to the Chacoans:

“As the twentieth century draws to a close, we find ourselves in a similar effort to control nature, only this time on a much larger scale. Our experiment is not based on ritual but on technology. We believe, as the Chacoans did before us, that we have gained a certain mastery over nature. Our God gave us dominion.

The question is: have we really achieved it? Could our mastery of nature be as much an illusion as the rain ceremonies of the Chacoans? Are we, like the Anasazi, headed for an environmental or technological disaster?” (Preston pgs. 261-262 of )

Today, Preston’s last question seems quaint. The answer is clear, but still we struggle to respond in a meaningful way to the increasing concentration of greenhouse gasses we spew into the thin film of atmosphere clinging to the earth. 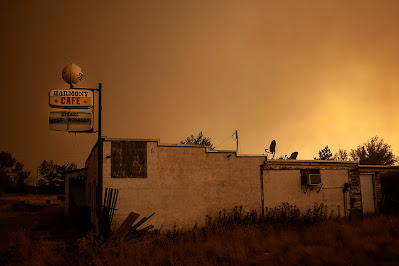 Wildfire smoke during the Mullen Fire west of Laramie, Wyoming. Smoky summers are part of our lives now. Ten years ago they were the exception. (September 2020)

During his journey, Preston speaks with a Navajo man named Edsel Brown. The Navajo, who themselves once migrated from the northwestern North America to the desert, believe that the earth is a living relation rather than a “resource.” Edsel Brown tells Preston (emphasis at the end is mine):

“This cycle goes back to a long time ago. It goes back to the first invention that was created. It goes back to when the Bilagaana [white man] realized that they had the power to make things. They had the power to create things. And they started to look on the land as a resource. They didn’t look at the land as relatives, as living beings, which it is. And they made these inventions, electricity, dams, cars, bombs, pesticides, everything. They kept thinking that all these inventions would help them. And yet, they’re still not helping them. And now, today, things are starting not to work for them, and they have no place to go, and they have a hard time realizing what is happening.” (Quote from a Navajo man, Edsel Brown in Preston, pgs. 263-264)

It’s hard for us to see changes that happen over decades or centuries, but the effects of climate change are increasingly obvious. Are we creating our own ruins? Who will visit them? 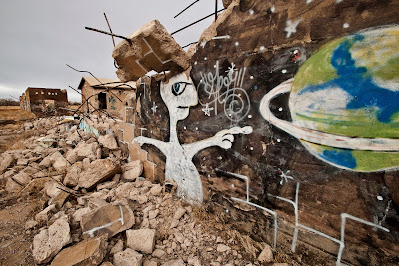 Ruins and graffiti at an abandoned industrial site in Laramie (2011). Where will we migrate?