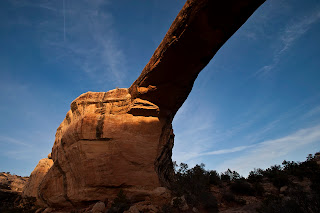 I have a love-hate relationship with National Monuments.  Maybe that’s too strong; it’s more love—feel-a-little-trapped.  I appreciate them and am grateful that they exist, buy my favorite places to camp and explore are at the ends of two-track roads or long walks, with no picnic tables, no scenic overlooks, no stinky outhouses, and no handrails protecting you from yourself.  But we promised Bei that this year we would have a more leisurely spring break, with no backpacks.  So we combined forces with our Laramie friends, Dave Fay and Amy Fluet, their kids Sam and Eliza, and Dave's Scotch collection that I augmented with a fancy bottle of Irish Whiskey. We found a nice site in the campground and set up a temporary village around the metal table (chained to the ground) and the double-walled steel fire pit (no wood gathering allowed).


Natural Bridges National Monument, NBNM for short, occupies the northwest corner of Cedar Mesa, a misnomer because it’s covered in juniper.  But that’s splitting hairs.  If you haven’t been there, the mesa occupies a large chunk of Utah between Blanding and Hanksville, south of the Abajo Mountains and north of the San Juan River, which flows into Lake Powell from the east.  It's almost as high as Laramie, so nights in March are chilly, but the days warm nicely, and soon it will be too hot for humans.

More important than the “cedars” are the canyons that cut through them and drain either directly into the San Juan or first into Grand Gulch or Comb Wash and then into the San Juan.  The canyons are beautiful and full of Anasazi ruins, pictographs, petroglyphs, and other archaeological debris, which pot robbers have meticulously scavenged.  They are deep, complicated, rugged, increasingly popular, and fun to explore.

The Monument itself protects several spectacular sandstone bridges that span White Canyon and a tributary, Armstrong Canyon, both of which contain ruins and surprisingly nice hikes with surprisingly few people, at least in March.  It’s worth a stop despite all of the infrastructure.  We camped there all week, using the campground as a base for more remote adventures outside the Monument, where we collected firewood each night before returning to Site #4.   I’ll post images from some of those explorations when I get them organized.

For now, here are a few pictures taken in NBNM during a hike through a short section of White Canyon and in our camp. 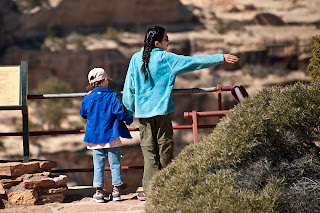 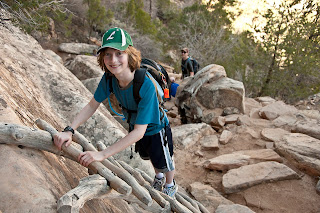 Sam Fay, descending a simulated Anasazi ladder on the way to Supapu Bridge. 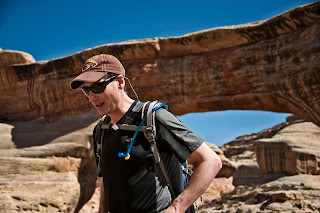 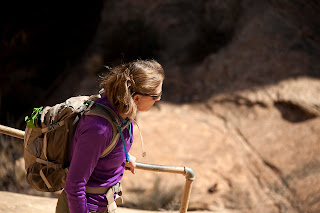 Ellen being protected from herself by a metal railing. 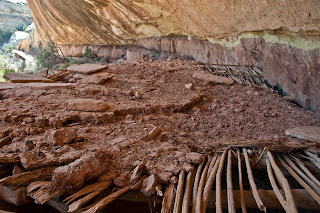 A Puebloan ruin in White Canyon. 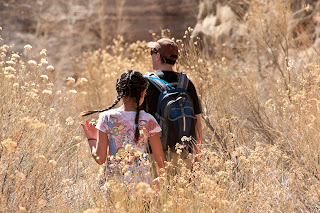 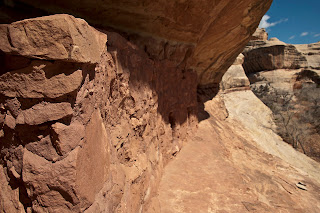 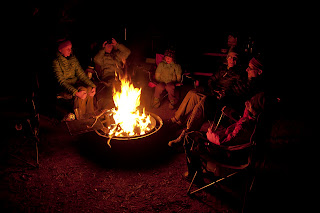 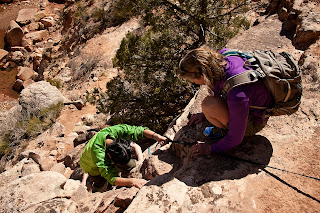 Ellen and Bei, downclimbing from a ruin, White Canyon. 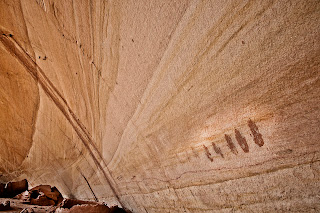 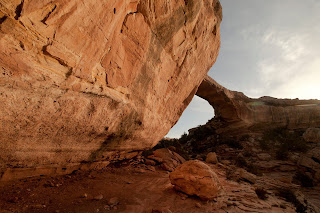 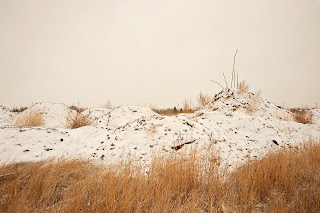 For me, there comes a time every winter, usually not long before we head south for spring break, that everything having to do with winter starts to feel bleak and uninspiring.  I'm not depressed, just no longer especially interested in white landscapes and cold, colorless expanses, or wind.

Photographically, I get into a rut and don't get out much until the first bit of spring color starts to lift my creative spirits--often with obligatory pictures of early-blooming pasque flowers, of which I have many.

In the spirit of late winter photography, I went out this morning and photographed:  piles of dirt covered with snow.  Believe it or not, I've been eyeing these dirt piles for at least a couple of YEARS.  They are near the interstate highway, and I see them frequently as I drive hither and yon.  One especially tall pile is decorated with sticks and conduit, a curiosity.  The way these objects poke out of the top of the dirt pile has always evoked for me tall prayer flags that I saw once near the Mekong River in China (see picture below), or a mountain summit adorned with some country's flag.  I can imagine young climbers struggling to the top of this pile of dirt to triumphantly plant some electrical conduit.

Maybe there's a universal instinct to poke sticks into places that are tall. 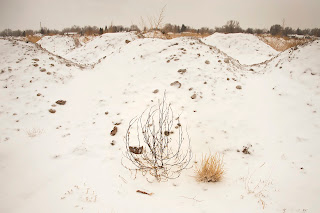 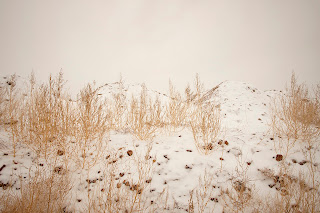 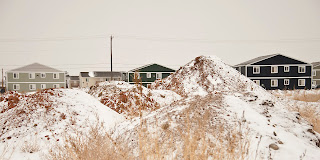 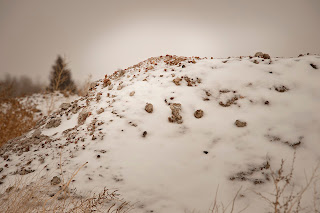 Dirt with rocks and snow. 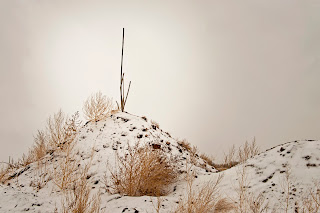 Tall pile with sticks and conduit 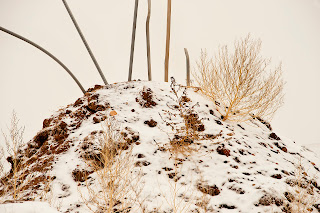 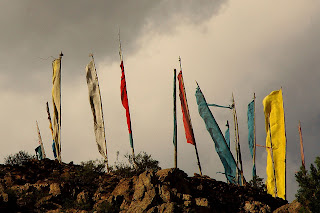