If you haven't seen the work of Miguel Angel Sanchez, check it out because it's incredible.  He was featured recently in the NYT Lens Blog (worth a daily look) for his portraits of Egyptian protesters.  The portraits are carefully designed to evoke the style of Renaissance paintings, and they do.  According to the Lens Blog each image takes about a week to produce.

In the words of Sanchez (from Lens):

“Each person is like a poem that has to be synthesized, always searching for the best metaphor that represents what each one of them evokes in me, without losing the connection with the reality that is presented in front of the camera.”

I'd love to learn how he does it.  The light that pours in from out of the photographs is fantastic.
Posted by Ken Driese at 5:20 AM No comments: 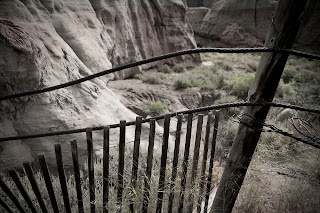 Adobe Town, in the Red Desert of SW Wyoming is one of my favorite places.  I've hiked amongst the spectacular badlands, camped near a coyote den and watched the pups play, found arrowheads and a medicine pipe, found a wooden crib and a plastic Big Wheel at an abandoned ranch house, photographed wild horses running across a dry lake bed, carried my daughter on my back when she got too tired to walk, and gotten my truck hopelessly stuck in the mud, only to engineer a way out using a cheap jack (I've GOT to buy a better one) and a lot of rocks and sticks.  Each trip reveals some new aspect of the place that surprises me.

One of last year's finds was a natural corral below the rim amongst the badlands, where cowboys had used old drilling cable to construct an elaborate fence to block the only exit.  When you are a photographer, the remains of odd human endeavors like this can occupy you for hours.  The cable that forms the spine of the fence is probably 3/4" in diameter and heavy as hell.  It's also rusted to a beautiful brown orange color, and wrapped around all sorts of interesting posts, bits of thinner cable, and in one place, an antler.  I can only imagine the determination necessary to even stretch the cable enough to get it off the ground.

At Adobe Town you can still sit on the rim at night and see no sign of humans.  The badlands are as spectacular as those in any national park.  Nobody is there.  And yet, it's a microcosm of the endless tension between preservation and development.  Periodically offered salvation from oil and gas development, new threats always emerge.  Protection is never permanent.  Every time Adobe Town is recognized as deserving of wildness, some company tries to gnaw away at it from the edges. Too few people realize how rare it is now to have such a place, and how easy it is to lose it. 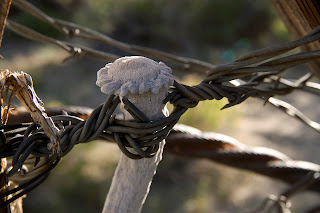 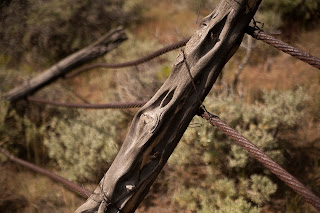 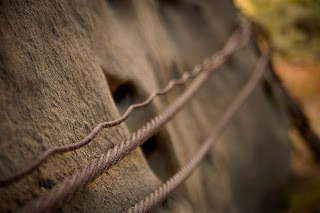 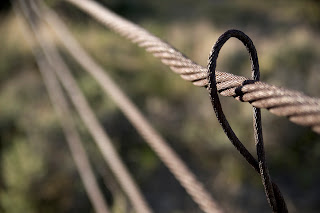 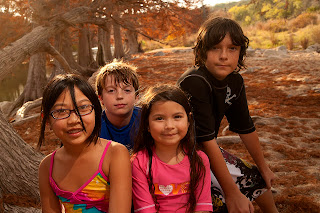 Bei and her cousins at Pedernales Falls near Austin.

My daughter, Bei (farthest left in photo), and I just spent a long weekend in Austin, Texas, visiting my two sisters and their kids. The weekend was a whirlwind of BBQ ribs, brisquet, and margaritas, with a couple of trips out into the Hill Country thrown into the mix.  The highlight for me was a days spent at Pedernales Falls State Park, an hour or so NE of Austin.  The infamous drought has left the river low, but still beautiful, lined by bald cypress trees and riddled with crystal clear swimming holes for the kids (yes, you can swim in Austin in November).  I shot the portrait as we hiked back to the car at the end of the day, in time to have dinner at the Salt Lick, a sprawling and famous BBQ restaurant on the SE side of Austin.

Posted by Ken Driese at 5:28 AM No comments:

Unable to Resist the Aspens 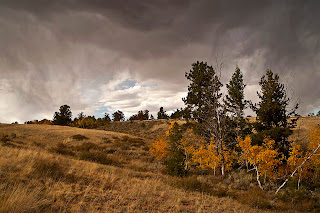 Like millions of other photographers, when fall comes I'm unable to resist the color, even though I know that every conceivable photograph of Rocky Mountain aspen trees has already been taken, often by  more patient landscape photographers than I (an aside -- did you see the discouraging news piece about an art installation that filled several rooms of a gallery with small prints of every single image uploaded to flickr in a 24-hour period?).  Still, it's beautiful out for those fleeting few weeks, and those of us that live in the Northern Rockies know that when that color is gone, we face a black and white world of wind, blowing snow, and cold fingers for 6-7 months, depending on the year.  So out we go, just to enjoy it while it lasts.  The image above is from one such outing, and a passing thunderstorm set off the landscape for me.  It's nice when the sky cooperates by filling itself with something other than crystal blue skies. 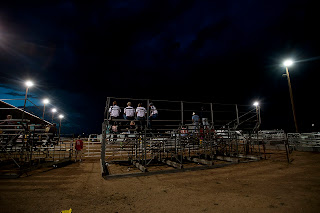 Last summer, we took my wife's sister and her twin daughters from New Jersey to the Albany County Fair to see the popular pig wrestling event.  The wrestlers, along with an unfortunate pig, are released into a round pen filled with slimy bentonite mud and a plastic barrel.  Their mission is to capture the pig and deposit it in the barrel as quickly as possible; the team with the fastest time wins the event.  I spent some time wandering around behind the grandstands, looking for the quintessential small-town summer event image, and the one above is my favorite.

When I returned to the stands, one of my nieces, horrified by the frantic squealing, remarked, "This makes me realize that it's not so bad living in New Jersey."

A few more images from the event: 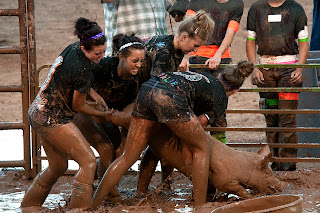 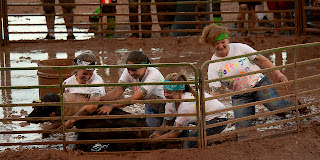 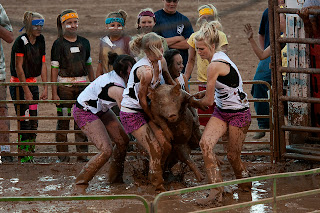 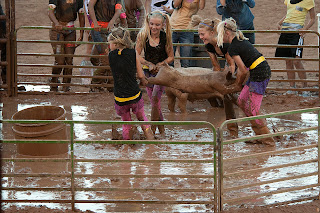 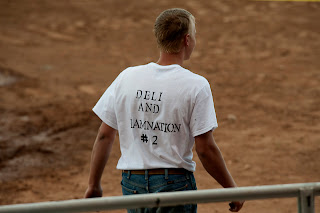 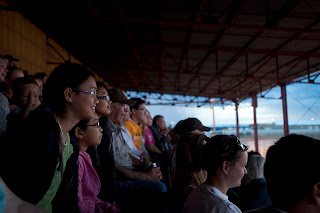 Posted by Ken Driese at 5:42 AM No comments:

One School at a Time Sponsorships 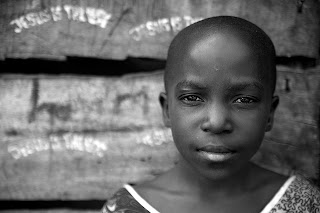 I returned to Laramie from Boulder, Colorado last night, where I attended a Board of Director's meeting for One School at a Time, the non-profit that I photographed for in Uganda in 2009.  One School partners with individual schools (one at a time) to improve educational opportunities for rural Ugandan kids.  They're small and they do a fantastic job of working with the school community to make sure that any improvements made to the schools will continue to function long after One School has left.  Lots of NGO's drop money into projects in Africa without ever really engaging with the people they are trying to help.  The result is a surprising legacy of decaying infrastructure, unusable or in disrepair.  When I was in Uganda I saw  textbooks on the history of Robert E. Lee in the South in donated "libraries" at rural schools, and an articulating hospital bed in an empty concrete room at an unstaffed "clinic" among banana trees.  One School is remarkable in that 96% of their funds go directly to their projects (tiny overhead for an NGO) and the projects continue to function on their own, thanks to carefully crafted community buy-in.

Early in the history of One School several of the directors traveled to Uganda where they met individual children, like Brenda, in need of support.  Later, they decided that individual sponsorship, though badly needed, was not the most efficient way to use their limited resources, so they evolved towards the current school partnership model.  Nevertheless, several of the directors personally took on sponsorships of a handful of children, including Brenda (above) and her sister Agnes, whose mother worked in a coal bin in Kampala selling coal for the owner for less than a dollar a day.  The girls were living in a nearby shack with their mother and suffered from crushing poverty and frequent illness.  Thanks to the sponsorships, these girls are now thriving and eager to attend secondary school, which costs more money than their original sponsors can afford alone.

One School is looking for a few people willing to commit to a long-term sponsorship (5 years) of one or more of these 5 or so children to get them through secondary school.  A commitment of $500/year for 5 years for each child would be ideal to cover all of their costs, although $100/year for 5 years would make a difference.  For these particular sponsorships, the directors are not looking for small donations, though you are certainly encouraged to donate whatever you can to One School at a Time to contribute to their school partnerships.  If you'd like to take on a long-term sponsorship, contact Bay Roberts, the One School director.  If you are interested in making any kind of donation to One School, you can do so at this page.

I'm hoping to put together a proposal to return to Uganda in 2012 to do a story on the issues and challenges associated with educating girls there.  Stay tuned for more information on this as I begin to plan for this project.
Posted by Ken Driese at 5:44 AM No comments: