The Dolomites: Alta Via 2 Overview 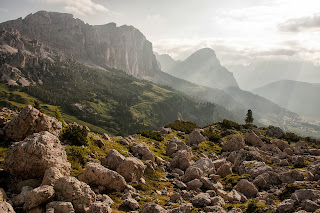 A view of the Dolomites from the trail that climbs onto the Sella Group from the Val Gardena.
(Click images to view larger)

I've been far too busy since the semester started to either blog or work on photographs from the summer's travels.  I'm starting to get over that hump, and hopefully can begin to post more regularly again.  I'll start with some random images from our trek in the Dolomites in late July.

In 1919, a significant portion of German-speaking Tyrol, including the Dolomite mountains, was ceded to Italy upon the signing of the Treaty of Saint-Germain-en-Laye.  One result is that today, signs and towns in the region include both German and Italian names.  More importantly, rather than blending the cuisines of the two cultures, the locals decided to double the amount of food one eats.  As we hiked from "hut" (a misnomer) to hut along a portion of one of the famous high routes in the Dolomites (the Alta Via 2), we were presented each night with two-plate dinners.  The first was usually Italian--heaped with pasta--the second a nod to German-Austrian heritage:  potatoes smothered in fried eggs and speck, thinly sliced ham that is the salt water toffee of the Tyrol, sold in tourist shops at every alpine pass in the region.

I'm certain that despite over a week of hiking over steep alpine passes and descending into deeply incised glacial valleys, I gained weight in the Dolomites. Sleeping in alpine rifugia, which over the years have morphed into comfortable hotel-like structures in spectacular locations, takes the edge off of the alpine experience.  You arrive after a day of hiking, drop your daypack (no need to carry much weight when you sleep indoors), and order a beer or two, some strudel, and eventually a couple of plates of dinner, before crawling into a comfortable bed to read yourself to sleep.

We hiked for seven days in mostly perfect July weather from the town of Bressanone, in northern Italy near the Austrian border, southward to just beyond the famous Marmolada Massif, a glaciated peak embedded in a sea of alpine terrain, traversing beautiful alpine terrain, hiking through meadows thick with wildflowers, and occasionally scrambling along rocky traverses equipped with steel cable handholds.  The girls (Bei, Lauren, and Leigh) survived despite little alpine hiking experience, and seemed to have fun, though they might be reluctant to admit it, and Ellen and I savored being in the mountains.

Here are a few images to give a taste of the experience. 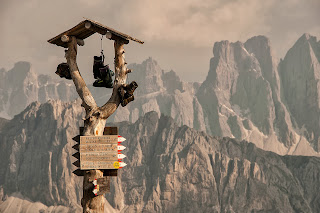 A signpost near the start of our hike, with the Odle group in the background. 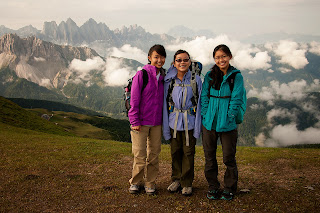 Lauren, Bei, and Leigh near the beginning of our hike. 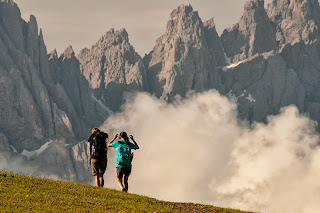 Ellen and Bei, leaving the Plose hut on the 2nd morning. 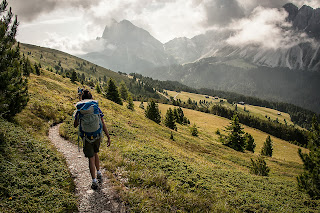 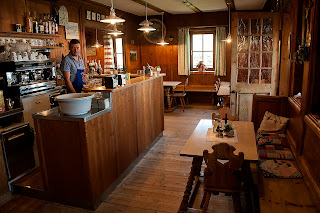 The Genova Hut, owned by the Messner family. 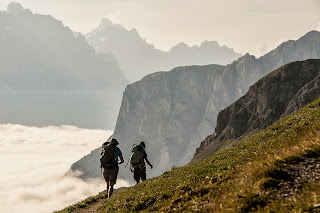 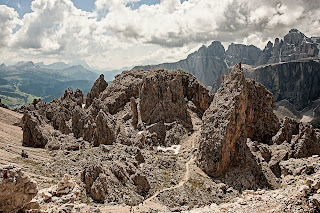 The trail down into the Val Gardena, with the Sella group in the background. 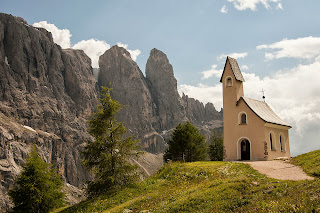 A church in the Val Gardena, with the Sella massif in the background. 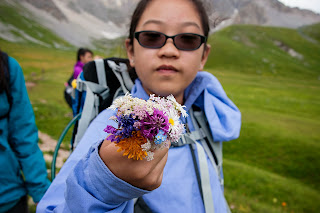 Bei on the last hiking day, sampling the local flora. 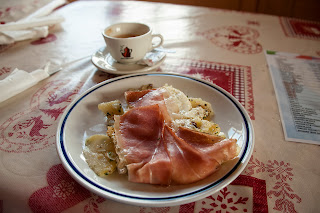 Breakfast:  potatoes, eggs, and speck.  This was often served as dinner plate #2 as well. 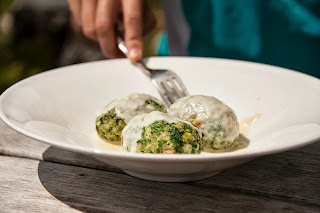 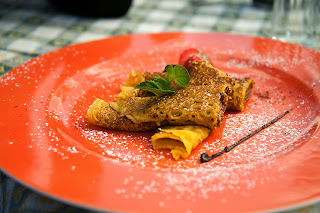 Midday snack along the trail: crepes.  Presentation is everything when you are hiking.