Photographing Autumn in the Shadow of Eliot Porter 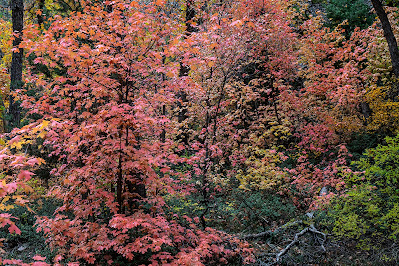 Eliot Porter's (1901-1990) photographs evoked his love of the natural world, and his work has influenced photographers for decades. He was an early advocate for color in fine art photography, an innovation resisted by photographers and critics who saw color photography as purely documentary even into the 1980s. In black and white prints they insisted, colors are rendered as tones at the discretion of the photographer, and these choices are the basis of art. In the book, Eliot Porter, he reported that Walker Evans, another influential photographer, once griped, "...in I suspect a reckless, not-to-be-quoted moment, that color is vulgar, nature is trivial, and beauty is not important."1 Porter believed just the opposite.

Eliot Porter photographed intimate details in natural scenes rather than grand landscapes. Layers of texture and pattern combined to fill his frames, which were at once simple and complex. Weston Naef, in the Afterword of the folio, Intimate Landscapes that accompanied a 1979 exhibition of his work at the Metropolitan Museum of Art in New York, observed that:

"His strongest compositions have the look of carefully planned randomness in which the surface is a tapestry of uniformly significant elements arrayed from one edge of the picture to the other." (pg. 126)2

Eight years later, Martha Sandweiss, a curator at the Amon Carter Museum, in the foreword to the book, Eliot Porter, documenting her museum's 1987 exhibit of his photographs, echoed this view:

"Porter's pictures are generally composed without a single eye-catching focus. Each is carefully laid out from edge to edge, and the picture frame feels full" (pg. 8)1

While the arrangements of elements in natural scenes are deterministic, the result of their interactions can appear random. Over time, Porter became increasingly aware of the paradox of random processes creating harmonious compositions. In the preface to Intimate Landscapes, he says,

"In mixed woods of pine and maple, the needles of pines drop throughout the year, building jackstraw mats of thin brown bundles on which, at the time of the fall of the leaf, the bright maple leaves settle at random, arranging themselves in harmonious patterns that defy improvement as though placed there intentionally." (page 11) 2

And he notices, not without awe, that:

"The details of geologic formations exhibit the most extraordinary combination of shapes and colors...and the haphazard occurrence of fractures can be discovered in harmonious arrangements that seem to defy the chance working of natural forces" (pgs. 11-12)2

His fascination with the paradox of harmony in randomness led eventually to a collaboration with James Gleick, who made chaos theory accessible in his book, Chaos: Making a New Science.4 Gleick and Porter published Nature's Chaos in 1990 with text by Gleick and a selection of images by Porter. In the forward to that book, Porter reflected that:

"Although I was aware that it was possible to select and photograph fragments of nature that expressed the idea that nature was an orderly process, I began to realize that my photographs also emphasized the random chaos of the natural world--a world of endless variety where nothing was ever the same." (pg. 6)3

In Intimate Landscapes, Porter succinctly describes the challenge of photographing randomness in a way that highlights harmony:

"In the broadest sense of the term, an optical image is an abstraction from the natural world--a selected and isolated fragment that stands before the camera." (pg. 11)2

This is much more difficult than it sounds, but over his 50-year career, Porter relied on a practiced intuition that resulted in an unmatched body of work.

Freed from teaching, I spent much of the fall traveling in the West, grateful to wander, watching the seasons and the leaves change. Faced with hillsides and canyons awash in yellow, red, and green foliage; punctuated by aspen, oak, maple, and cottonwood trunks; interrupted by deadfall; fragmented by meshes of bare branches; and all draped over topography and geology, it seemed impossible not to limp along in Porter's footsteps. 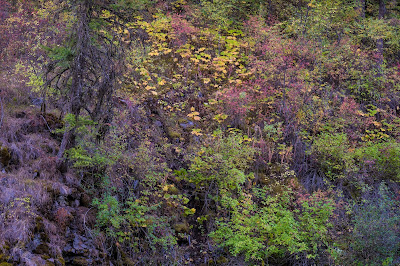 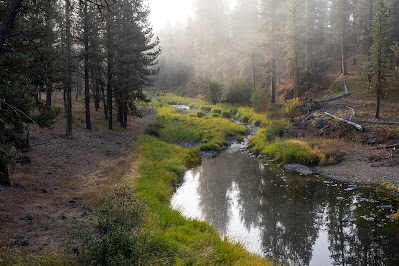 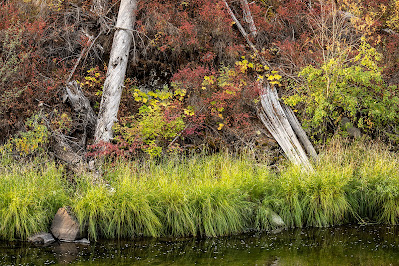 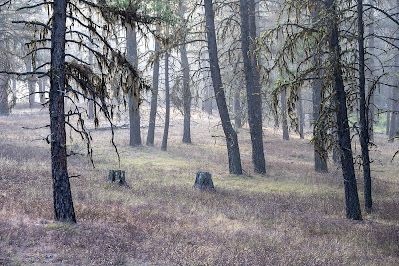 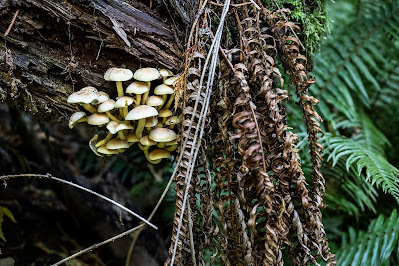 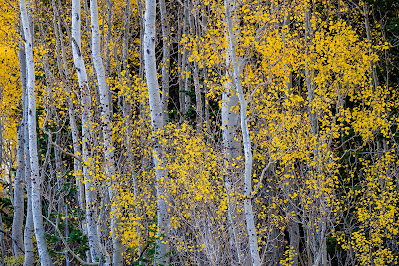 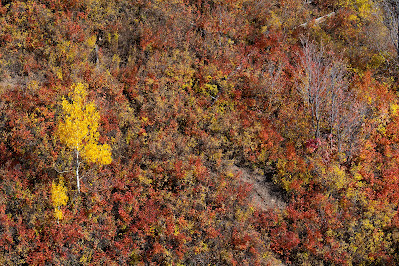 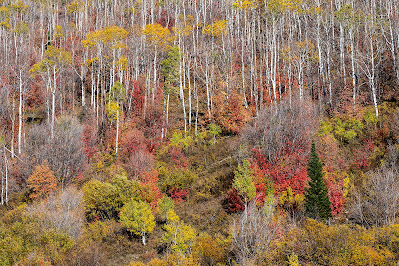 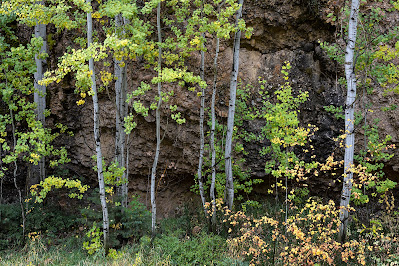 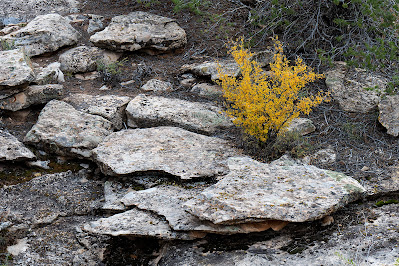 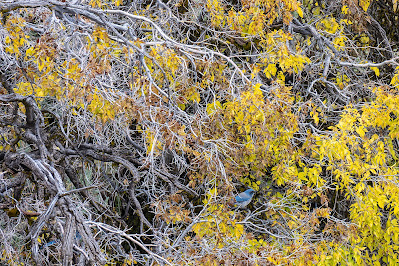 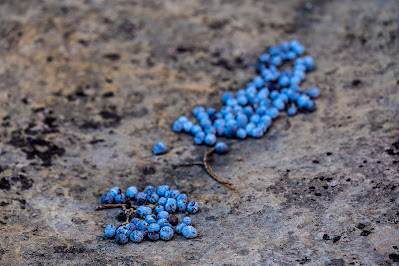 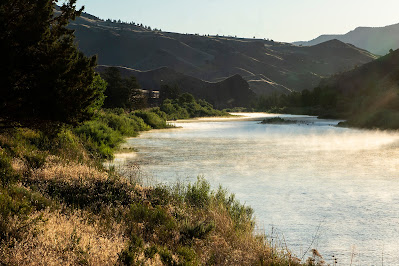 There are many ways to be remembered after you’ve died, some better than others. John Day may have preferred to remain a footnote in history, where he’s been described as a “lanky, good-natured, forty-year-old"1 hunter from Virginia who accompanied John Jacob Astor’s Astorians across the U.S. in the early 1800s in a bid to establish the first trading post on the Pacific Northwest Coast. Instead, he is immortalized in Central Oregon by a town, a river, and a national monument because he managed to stumble back to friendly settlements after being stripped naked and left in the wilderness by Native Americans perhaps in retribution for an earlier killing of two of their people by whites. The resulting PTSD by some accounts left him sometimes ranting and babbling incoherently.

Peter Stark’s “Astoria,” an engaging book on the history of John Jacob Astor’s campaign to establish a trading presence at the mouth of the Columbia, provides more information on John Day’s fate and the difficulties of gaining a foothold in the Northwest, then a vast unmapped wilderness. Today, Central Oregon is neither wilderness nor unmapped, but it is beautiful, with rolling volcanic hills covered by grass and shrublands punctuated by forests, farms, and small towns kept alive during drought by water sucked from nearby rivers, including the John Day.

En route to our first packrafting trip, an easy 4-day float interrupted by a few minor rapids, Ellen and I stopped at three units of the John Day Fossil Beds National Monument, drove through the town of John Day, and finally, on the only rainy day in a month of traveling, along with our friends Brian and Jenny from Seattle, inflated our packrafts at Service Creek and headed down the river for four days to the Clarno takeout with flotillas of bass fisherman and families. The trip was a gentle introduction to packrafting. Drought had lowered the river enough so that the main challenges were dodging rocks and scraping bottom rather than getting pushed around in the infrequent rapids and riffles. 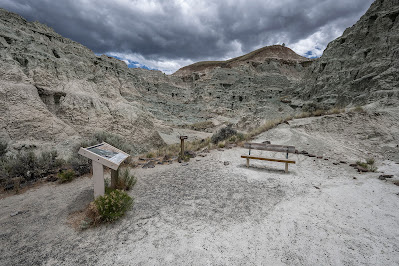 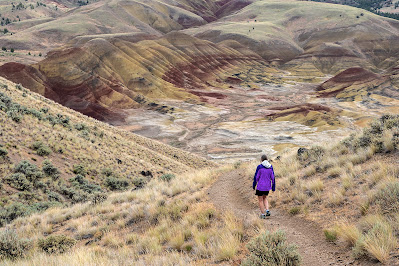 Ellen descending from a viewpoint at the Painted Hills Unit of the John Day Fossil Beds the day before we put-in. 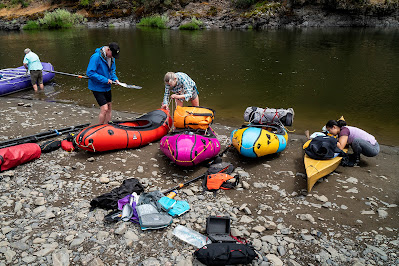 Rigging our boats at the Service Creek put-in on the only rainy day of the trip. Brian (left), Ellen, and I used Alpacka Expeditions, and Jenny (right) floated in the sea kayak that she built herself. The sea kayak was faster on flat water, but not as suited to rocky rapids. 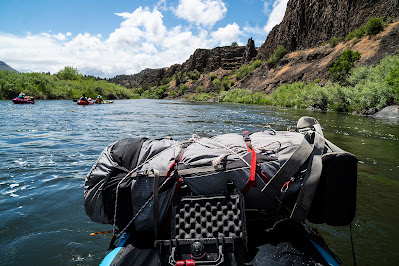 On the water. After this trip, Ellen and I had our boats retrofitted so that our gear could be stored inside the inflated boat tubes rather than strapped to the bow. 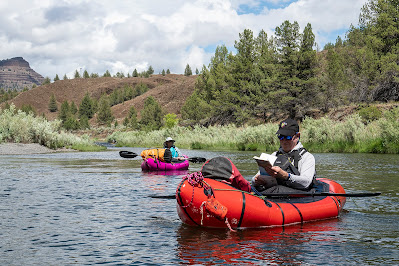 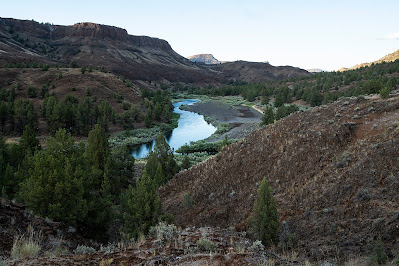 The river from one of the volcanic bluffs near our first campsite. 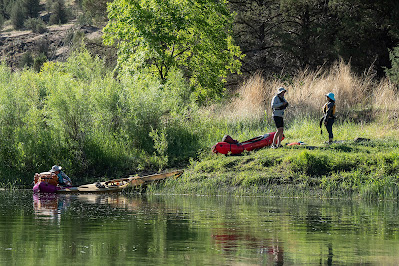 Packing up for a day of floating. 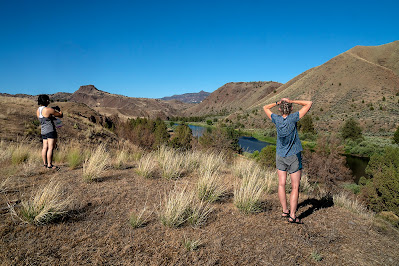 Ellen and Jenny scoping the river. 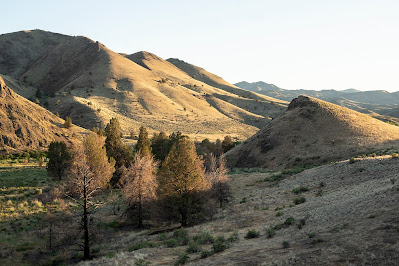 The Central Oregon landscape. The vegetation was crispy dry, which seemed surprising for Oregon in June. 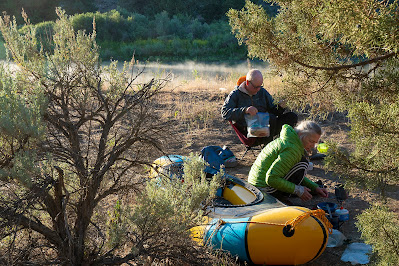 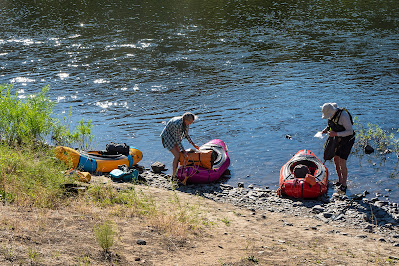 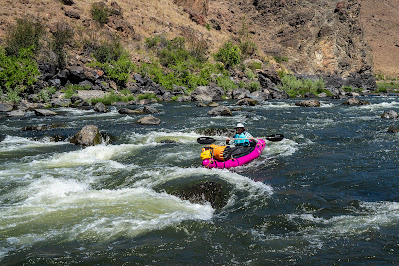 Ellen negotiating Homestead Rapid, the biggest on the trip. We scouted it since none of us had packrafting experience, but the line was straightforward in low water and required only dodging couple of rocks. 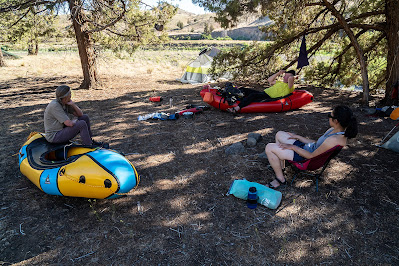 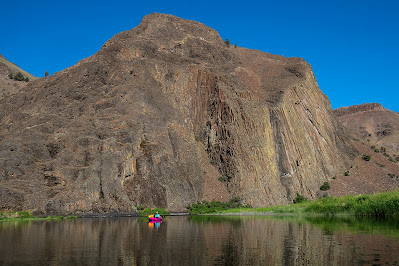 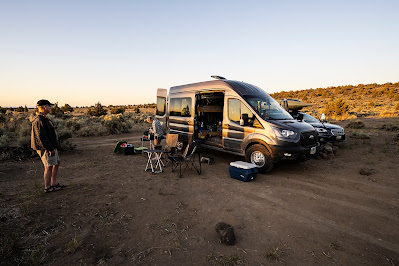 Camping in the Oregon Badlands SW of the takeout after the trip.
1. Stark, Peter. 2014. Astoria: John Jacob Aster and Thomas Jefferson's Lost Pacific Empire: A Story of Wealth, Ambition, and Survival. Ecco. 403 pgs.