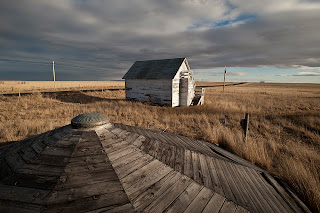 I visited this abandoned farm on the Van Tassell Road in Goshen County, Wyoming, a number of years ago while on my way to the Black Hills and have always wanted to return.  Ed Sherline and I stopped here earlier in March while we were on our Eastern Wyoming weekend road trip.  This particular farm is just a mile or so north of an abandoned school that used to have a room full of old books, which have since been removed--hopefully to a good home.  The most unique feature of this farm is the wooden cistern cover (above).  I also love the white paint that stands out in contrast to the stark landscape and gray clouds to the east.  I plan to experiment with monochrome versions of some of these images, but I like the golden color of the grass too.  The attic in the white outbuilding is full of glass jars of all sizes.  Why? 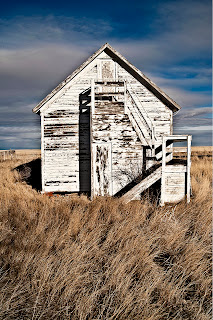 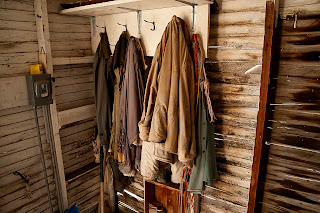 Coats still hanging in the mudroom. 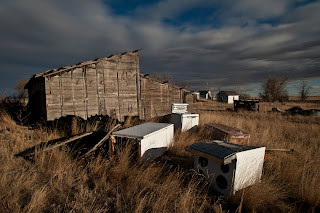 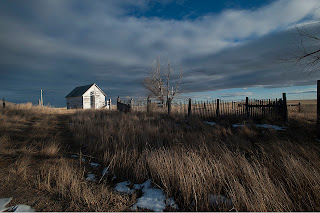 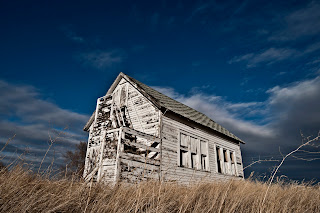 Outbuilding with attic full of glass jars.
Posted by Ken Driese at 7:57 AM No comments: 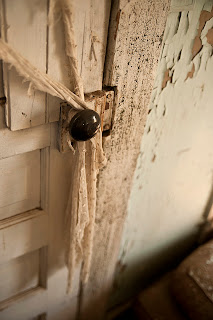 A curtain hangs on a doorknob in an abandoned farm east of Chugwater, Wyoming.  March 2012.
(click images for larger view)

Many photographers, myself included, are drawn irresistibly to places that humans have abandoned.  Images of empty buildings in cities, stark farmhouses in the midst of abandoned fields, and neglected historic places like the immigrant intake buildings and hospitals of Ellis Island are common.  Painters have gone down this road too; think of Andrew Wyeth's Christina's World, with its farmhouse.  The radio show This American Life did a story about kids exploring an abandoned house that appeared to have been vacated almost in an instant, with wallets left on bedside stands and dishes in the sink.  Tom Waits sang about them (thanks Melanie for this link).  The Onion even made fun of this obsession in an article about artists documenting urban decay:

DETROIT—After spending more than a century exploiting urban decay to create deeply moving, socially conscious works of art, the art world announced Tuesday that it had captured all the beauty it was going to find in rusted-out cars, abandoned houses, and condemned industrial sites. "These modern ruins speak to the very heart of the human condition, but at this point every last inch of Detroit and Oakland has been documented in photographs, on film, or as part of a multimedia installation," said artist Devon Gerhart, who told reporters that devoting so much time to contemplating the wounded grandeur of blighted cityscapes had led him to the point where he just wanted to see the places cleaned up.

Why are we so interested in these places, and why do we keep photographing, painting, and telling stories about them even while recognizing the danger of feeding a cliche?

For me there is the fascination of exploring, without knowing what weird thing you might find:  furniture arranged around a 1950s TV set with a wedding photo displayed on top of it;  school books with handwritten notes to schoolmates scattered among decaying desks at a rural schoolhouse;  clothes left hanging in closets;  phone numbers chalked on the walls of a workshops;  a kid's bedroom decorated with posters from the 1970s, with wind blowing off the prairie through broken windows.  At an abandoned ranch in the Red Desert I found a baby's crib tossed into a coal room and a sunlight-damaged Big Wheel trike in the yard.  What became of that ranch kid?

So these places are interesting for the mystery of the lives that were lived in them and then abandoned for some other life.

I'll also never tire of the simple design of old farms and outbuildings.  I love the porches and the wooden siding and the functional shapes, but also the subtle decorations--old curtains, beautiful doorknobs, simple fences.  I love the way these places weather when left to fend for themselves.  Wyoming is dry and little rots away, but it is also harsh, and the wind and snow and temperature extremes work to make houses sag and age, so that they blend with the grasslands around them, eventually to be swallowed up.

In a word, exploring old houses is fun;  cliches be damned.

I have a lot of images to post from just one weekend trip to Eastern Wyoming, and I hope to make more trips this spring.  The photographs in this post are from an abandoned farm east of Chugwater that I had visited once before and revisited earlier this month. 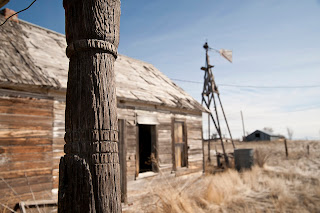 A porch post at an abandoned farm east of Chugwater. 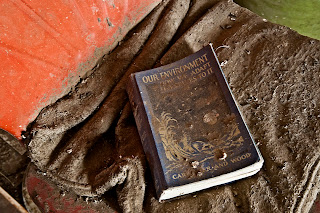 Too ironic to believe?  Maybe someone set this up before me, but I didn't. 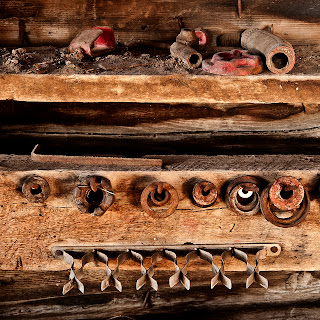 The wall above a workbench, in one of the outbuildings. 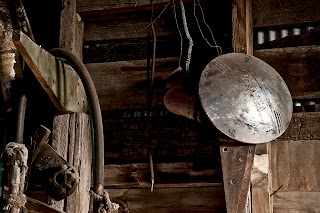 A hubcap in an outbuilding. 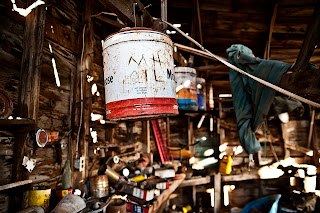 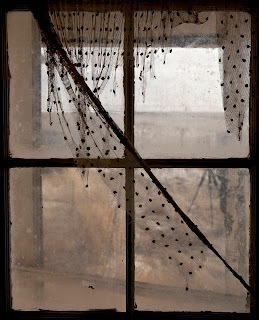 A window looking out an a covered porch. 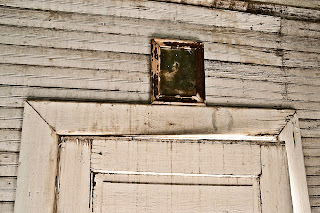 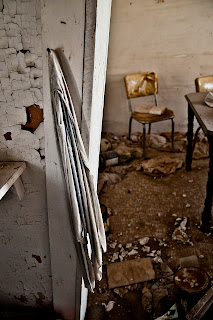 Dishtowel and dining room.
Posted by Ken Driese at 8:15 AM No comments:

Back from the desert 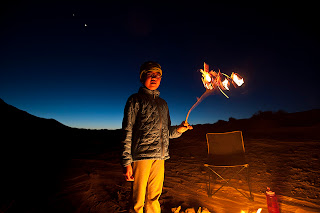 Bei playing with fire in the San Rafael Swell.
(Click any photo for larger view)

The weather in Southern Utah treated us well during our spring break last week, and then we returned to Laramie to find 65 degree sunshine--almost unheard of in mid-March and just a little ominous in a climate change sort of way.  I'm reluctantly back at work with lots to do before I can write a proper blog post about the trip, but here are a few photos.  We spent a night in the San Rafael Swell on our way south and walked the loop up Wild Horse Canyon and down Bell Canyon, about 8 miles altogether of fun narrows and easy hiking.  Then we spent the bulk of our week backpacking in and out of Silver Falls Creek Canyon to the Escalante River, with a day hike up Harris wash on the other side of the river (the river crossing is easy and shallow...but cold!).

Silver Falls is not the most exquisite Escalante canyon I've walked through, but it was nice, and Harris Wash was spectacular.  New and unusual for me was Ellen and Bei's sighting of 2 bighorn sheep near the river.  I've seen them in the mountains but never in the desert.  They watched us with mild interest as we jockeyed for a better viewpoint from the slabs below.  I also found an old bourbon bottle eroding out of the bank of Silver Falls Creek near an abandoned corral.  It was empty.

Silver Falls was a route used by Mormon settlers in the 1800s--they somehow pulled wagons through this canyon and Harris Wash to gain access to southern settlements like Bluff.  Along the canyon are names and dates hacked into the sandstone often with axes, which have a certain charm just by virtue of their history and age. 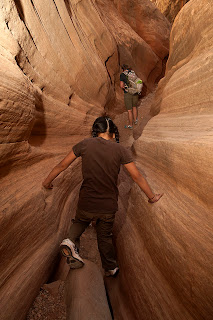 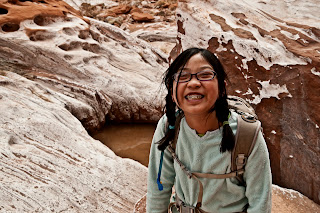 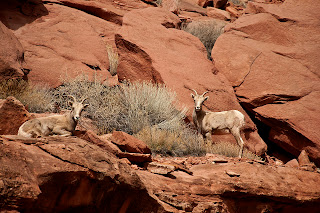 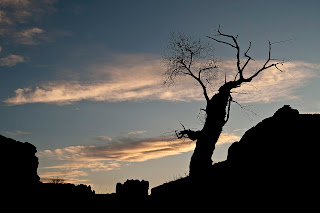 Dusk on our last night in Silver Falls Creek, Escalante.
Posted by Ken Driese at 9:08 AM No comments: 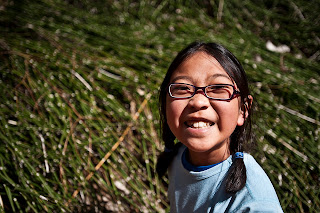 We're hitting the road this morning for Spring Break!  If we can somehow get ourselves packed up and out of here early enough, I'm hoping to camp in the San Rafael Swell tonight and at the trailhead for Silver Falls Creek in the Escalante tomorrow.  Exclamation point!!  Have a great week.
Posted by Ken Driese at 5:24 AM No comments:

We've got it good in Laramie 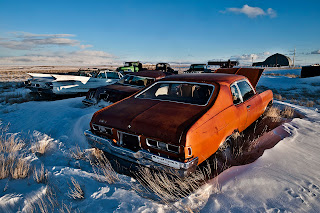 Previously-owned cars in Bosler, Wyoming.  The bumper sticker says it all.
(Click image for larger view)

I don't have time this morning for a significant blog post, but will offer up the above photograph, taken last weekend in Bosler on my way out of town to shoot in Eastern Wyoming.  The bumper sticker tells the tale.
Posted by Ken Driese at 5:01 AM No comments: 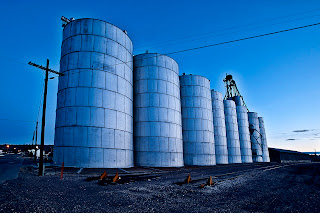 A friend, Ed Sherline, and I joined forces over the weekend and went for a long random drive around the plains of Eastern Wyoming almost to the Nebraska border looking for photographs.  After spending Friday night at a cheap hotel in Wheatland, we headed for Chugwater in the pre-dawn light of a bitterly cold and ferociously windy Saturday morning to photograph the grain elevators and storage bins along the railroad tracks there until we were too cold to push our camera shutters.  My favorite images were made before the sun actually rose, thanks to the wonderful blue morning light on the silver metal structures.

It's interesting when on a photography trip with another photographer to discover that each, photographing in the same places, makes very different images.  We all see the world differently.

I'll be posting many other images from this trip, eventually, but I'll start with these. 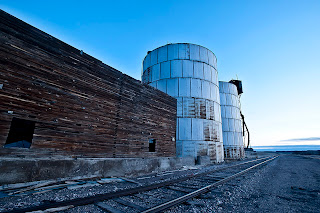 Grain storage.  The wooden building is made entirely of 2x6's stacked up and nailed so that the walls are solid wood. 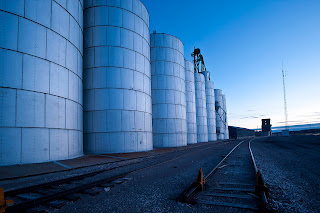 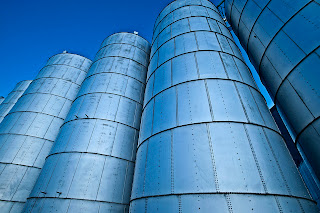 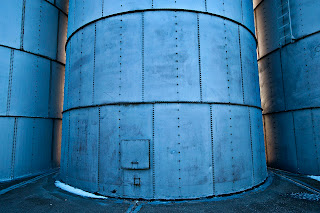 A touch of light between cylinders.
Posted by Ken Driese at 9:09 AM 1 comment: