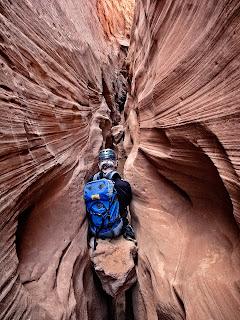 The canyon that  threatened us the most on our recent fall canyoneering trip is called Sandthrax, and there had been a lot of e-mail chatter before the trip about going for it despite its reputation.  Don Reyes, from Tahoe, was the keenest, while the rest of us (Ken, Larry) were more jittery but maybe willing.  I'd vacillated before the trip, but decided I’d go in if everyone else was game.  We had experience, gear, and a rim crew (Jane, Jim) that could potentially save us if we got trapped.

The internet is rich with dramatic stories about Sandthrax, with titles like “The Chasm of Doom.”  Climb-Utah.com warns that “Errors in technique or judgment will likely result in serious injury or death.”  The canyon has an X rating, meaning that a screw-up can lead to, well:  death.  But other descriptions didn't sound that bad—moderate stemming high off the ground--mostly secure with a few tricky places and one distinct crux that could be at least partly aided with fat cams.

Tom Jones, founder of Canyoneering USA, and another canyon guide who happened to be in the North Wash while we were there had told us that the recent rain made the rock friable, and that it was best to stay out of Sandthrax for 4-6 days until it dried, giving us another piece of information to chew on.  But as the weekend progressed under crisp, dry fall skies, the rains seemed less relevant.

Around the campfire we circled the idea, our numbers diminished by the last-minute absence of Steve Millard, who was recovering from a bad hip, and Mike Kehoe, who had cancelled because of unexpected business travel.  This was relevant, because there is safety in numbers in technical canyons;  three or four people are ideal for Sandthrax.

Maybe we have the technique and judgment went the campfire discussion (Don), as we sipped our margaritas.  Or maybe good judgment means deciding not to go in (me and Larry)?  Are our fears unfounded?  Are we just chicken?

I’d even  lost sleep before the trip worrying about whether to commit—not something that usually plagued me before canyoneering trips, which are mostly pure fun.  One night while I did sleep, I’d dreamed that I was in Sandthrax, inexplicably wearing a snorkel and mask.  What did that mean??  We joked about using the snorkel to aid the crux.

In the end, we didn’t make the descent, so this story won’t take its place in the heroic Sandthrax anthology.  Sometimes challenges need to percolate for a while.  By the end of the weekend  we’d hiked up and down the Sandthrax rim, peering down into the darkness and rationalizing what we could see.  Don in his enthusiasm even rappelled in and puzzled over the first challenging silo (deep hole), before climbing back out to report what he had seen, his ardor slightly (but not completely) dampened.

I suspect that one day we will descend Sandthrax, but on this trip we let it go and spent perfect fall days in fun, less intimidating canyons:  Leprechaun, Boss Hog, and Woody.  I always feel a little disappointed in myself when I back away from challenges, especially when it’s a battle between irrational fear and rational judgment.  Was I being controlled or was I in control?  We probably could have successfully descended the Chasm of Doom, but it will be there next year and the year after, waiting patiently. 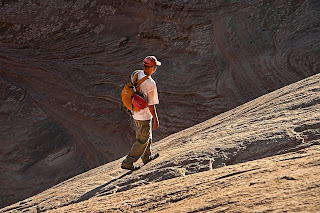 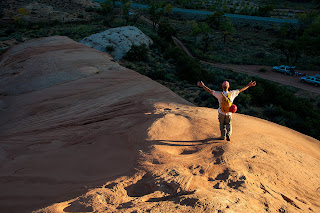 Don, returning to camp from Sandthrax. 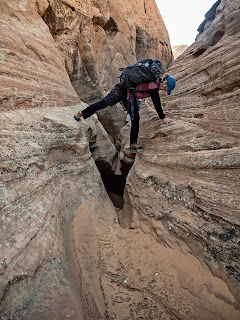 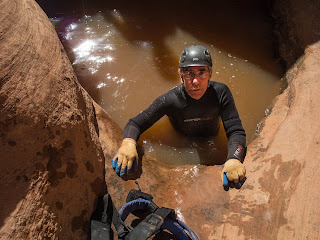 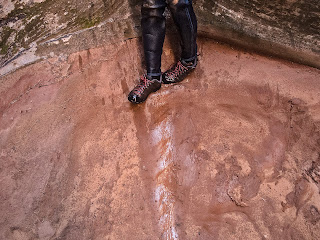 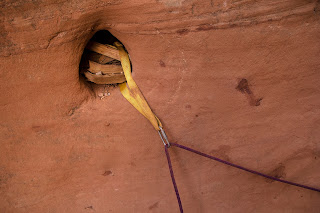 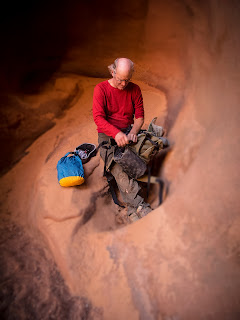 Larry Scritchfield near the end of Leprechaun Canyon. 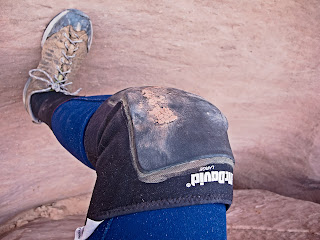 My knee.  You can tell I'm not in Sandthrax.  The sharp focus means it isn't shaking. 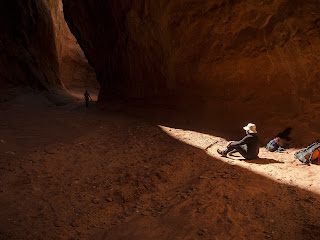 Near the bottom of Leprechaun. 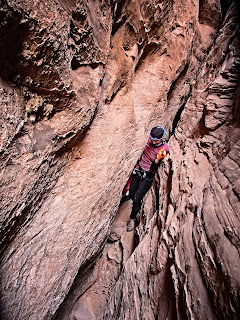 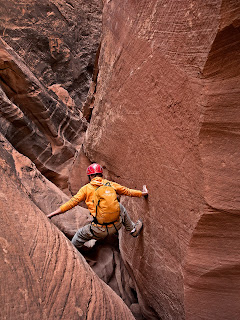 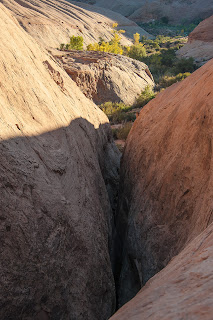 The lower reaches of Sandthrax near the exit.  Note that we aren't in there.

Posted by Ken Driese at 7:32 AM No comments:

Creeped Out in the Red Desert 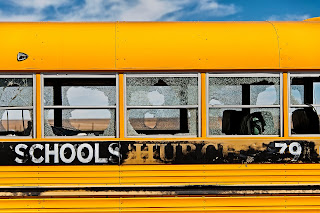 A SchoolsChurch bus (#79) at an abandoned home south of Wamsutter, in the Red Desert.
(Click images to view larger)

Abandoned places in Wyoming rarely creep me out.  I've visited a lot of them.  But an empty house  in the Red Desert combined enough creepy elements to be featured in the kind of movie that I never watch--the ones where doors lurch open revealing menacing John Boehner-like figures, skin taught and orange, driven mad by the wind or the Tea Party.

Not far from Wamsutter, in the tiny town named Red Desert, a man was once found long-dead in his ramshackle house, the subject of a dark installation at the UW Art Museum several years ago.  In a darkened room of the museum, you peered into the house through dirty windows and heard his old radio, broadcasting from the past. Crickets chirped.  Boo!

Ed Sherline and I were on our way home from a weekend of photographing classically pretty landscapes deep in the Red Desert between Baggs and Wamsutter.  We'd spent much of the previous day negotiating a confusing network of drilling rig access roads to camp at the base of the Haystacks, badlands east of Adobe Town. I'd found an arrowhead and a mano stone among the sand dunes, and listened to coyotes say goodnight to the setting sun.

After spending a nice morning wandering in the sagebrush shooting photos of orange-tinged badlands and silver light on rabbitbrush, we packed up and headed for home.  Ed had a dinner to attend, and I was hoping to get to Laramie by 2 p.m. to take Bei to an ice skating event.  We almost made it to the interstate without stopping, but circled back to have another look at an abandoned compound north of the road. There may have been a No Trespassing sign posted at one time.  A square of plywood was nailed to a fencepost near the long driveway, but nothing was stapled to it, so we drove the quarter-mile-long two-track to the site.

The house itself raised the first red flags, even from a distance.  Sheathed in stolen (or scavenged) billboards advertising McDonald's, the Ptarmigan Hotel, and a Ramada Inn, the place suggested a struggle for survival far off the grid.  A car in the yard wasn't just abandoned, it was flipped upside down and riddled with bullet holes. An old school bus, windows shattered, was filled with old clothes and a mattress, and a Bible lay open to a page defining "God's Word."  A shed, also made from billboards, was buried up to its eaves. A teddy bear lay fading in the sun, face down in the dirt, the store security button still clamped to its back.  A dead raven rotted in front of the entrance to the house, it's ribs bleached white, contrasting with black feathers still clinging to its head and wings.  The house was full of old clothing and lined with tattered blankets meant (ineffectively) to keep out the cold wind.

We snapped photos, eager to document the place and get the hell out of there.

In Eastern Wyoming, abandoned farms tell stories of hard times and changing demographics, where grown children migrate to Denver for excitement and opportunity.  Along highways, abandoned businesses speak of normal struggles with a tough economy.  But this place suggested a life gone off the rails. Who were these people?  What happened to them?

We hit the interstate, fueled up, and drove towards home, looking twice at the fading billboards along the way. 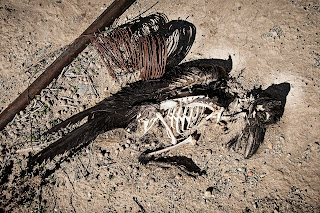 Happy friggin' Halloween or something.  This dead raven greeted us from the dirt directly in front of the house. 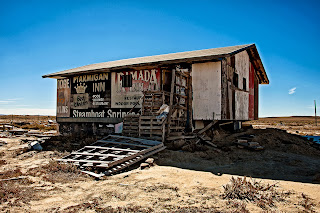 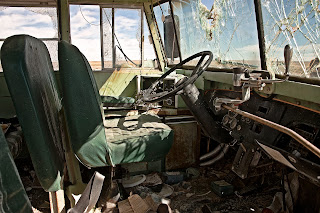 Interior view of the bus driver's seat.  A 1997 calendar was taped above the side window. 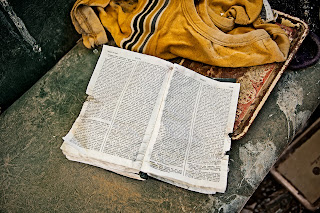 An open Bible on one of the front seats.  I didn't set this up. 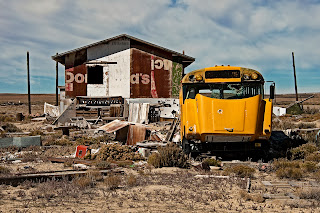 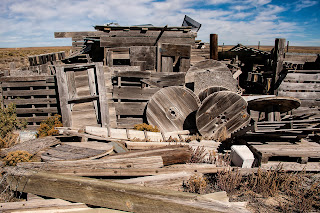 A makeshift animal pen behind the house.  Or something. 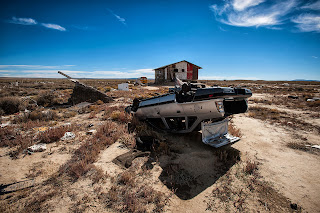 Nice landscaping idea.  Let's turn our abandoned cars upside down and shoot them!