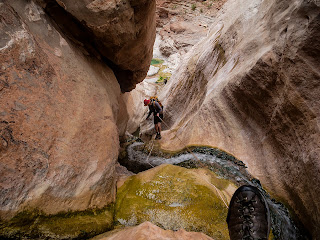 Don Reyes on one of the rappels in Big Canyon.
(Click images to view larger)

The Grand Canyon remains a big hole in my knowledge of southwestern geography.  I’ve spent a lot of time on the Colorado Plateau in Utah, but very little in the Grand Canyon, save a trip to Phantom Ranch to try to climb the Zoroaster Temple (it snowed) and a short hike from the rim when I was a teenager on a family vacation.  There’s been a lot of interest in canyoneering in the Grand Canyon lately, especially with the publication of Grand Canyoneering, a masterful overview by Todd Martin, and a film in the Banff Festival in 2013 called Last of the Great Unknown, by canyoneer Dan Ransom, that highlighted exploration in the canyon.

In May, I joined Larry Scritchfield, Jim Akers, and Don Reyes to begin to fill the knowledge hole.  Grand canyoneering is famous for long, grueling multiday treks, many of which require the use of packrafts to escape down the Colorado River after emerging from whatever canyon you have descended.  None of us have invested in packable boats yet, so for our first Grand Canyon adventure we chose Salt Trail Canyon and Big Canyon, both of which empty into the Little Colorado River about 4 miles upstream from its confluence with the Colorado, a place that is the potential site of a controversial development.  The canyons are relatively easily accessed by the steep Salt Trail that connects the rim with the Little Colorado.

We left our camping gear on top of the Redwall Limestone just above the technical section of Salt Trail Canyon, and descended it on our first day before hiking back up the Salt Trail to make camp (a convenient strategy for doing both Salt Trail and Big).  Salt Trail Canyon is famous for its huge water-filled keeper pothole, but the water in it was high enough that it wasn’t too hard to escape, and the rest of the canyon required just a few awkward rappels and some wading.

The next day we traversed (arduous) the top of the Redwall from our camp to where it intersects Big Canyon, and  despite somewhat threatening weather (flash floods??!!) we descended the beautiful canyon, including rappels down colorful travertine falls, without mishap, to emerge where it entered the turquoise waters of the Little Colorado. 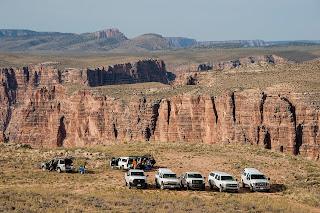 Our camp on the rim, along with Arizona Fish and Game trucks, parked during a humpback chub monitoring project on the Little Colorado, far below. 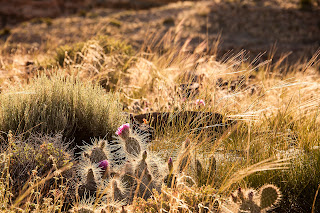 Blooming prickly pear on the rim. 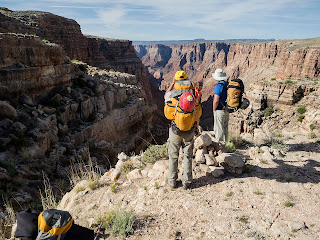 Don (left) and Larry contemplating the Salt Trail from the rim. 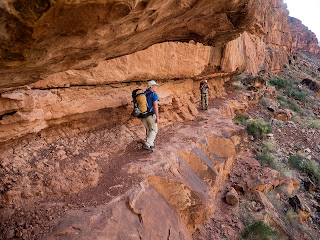 On the Salt Trail. 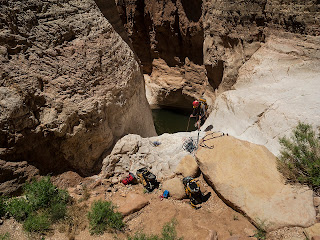 Don rappelling into the big keeper in Salt Trail Canyon. 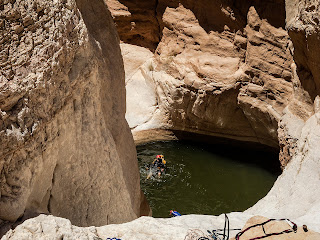 Swimming around in the keeper hole, looking for a way out. 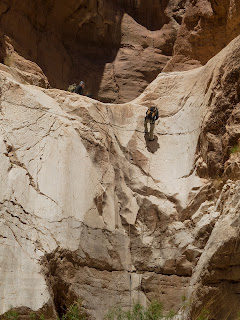 Rappelling from the lip of the keeper to the canyon below. 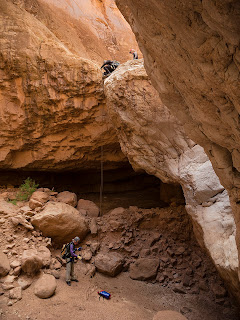 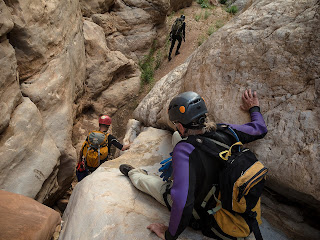 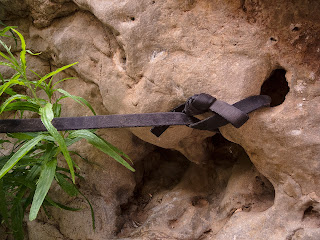 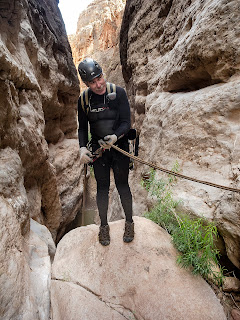 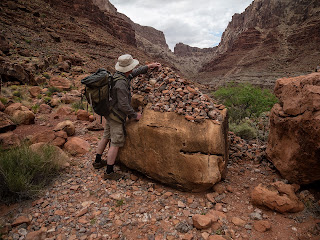 Adding a stone while climbing back to camp. 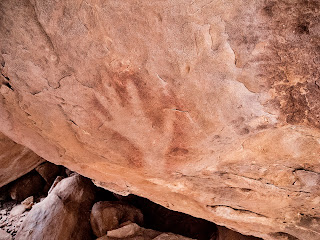 We weren't the first to ascend the Salt Trail. 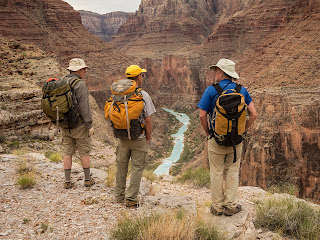 Jim, Don, and Larry (L to R) looking at the Little Colorado from the Redwall traverse to Big Canyon. 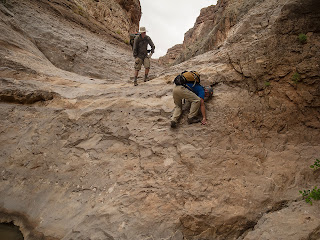 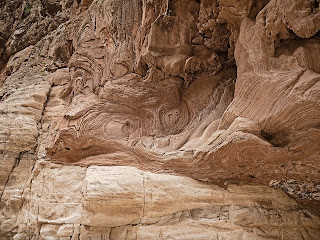 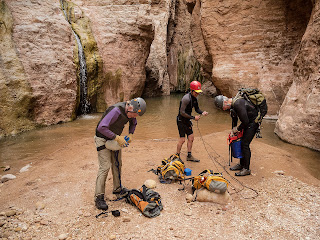 The crew at the bottom of a rappel into a spring in Big Canyon. 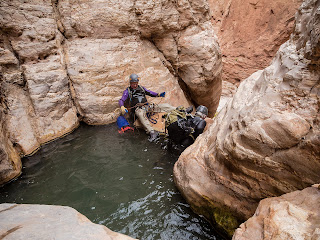 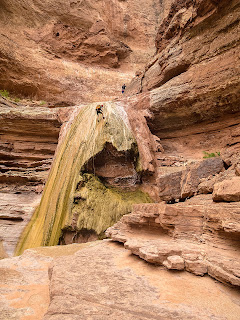 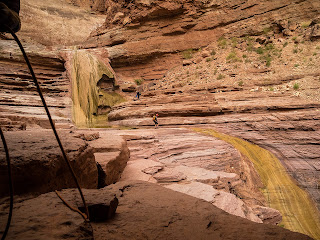 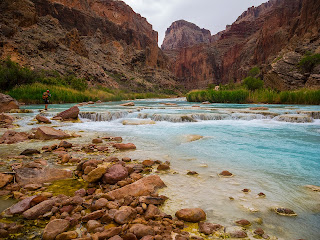 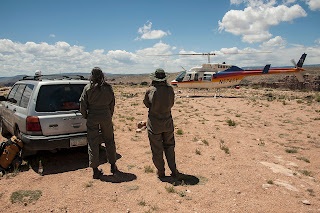 Biologists at the rim, soon to fly down the route we had just hiked up so that they could spend a week studying Humpback Chub and drinking cases of beer also flown down by helicopter. 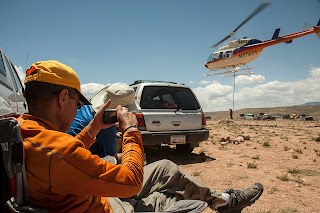 Don and Larry, watching the humpback chub show at the rim. 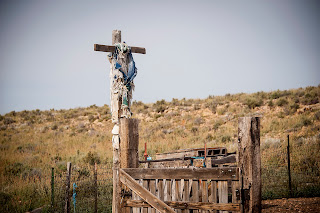 An old scarecrow at a Navajo hogan near the rim.  I spoke to an older Navajo man who was out driving around in his truck.  He told me that he grew up near the rim, and that it was great.  He and his friends spent their days running up and down the roads and exploring.  "Now nobody wants to live out here," he told me. 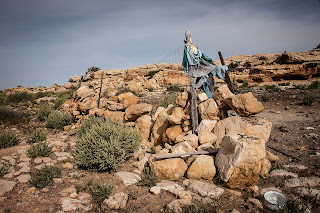 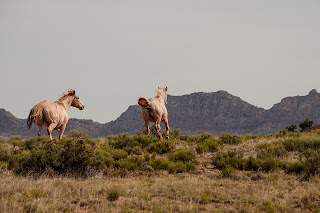